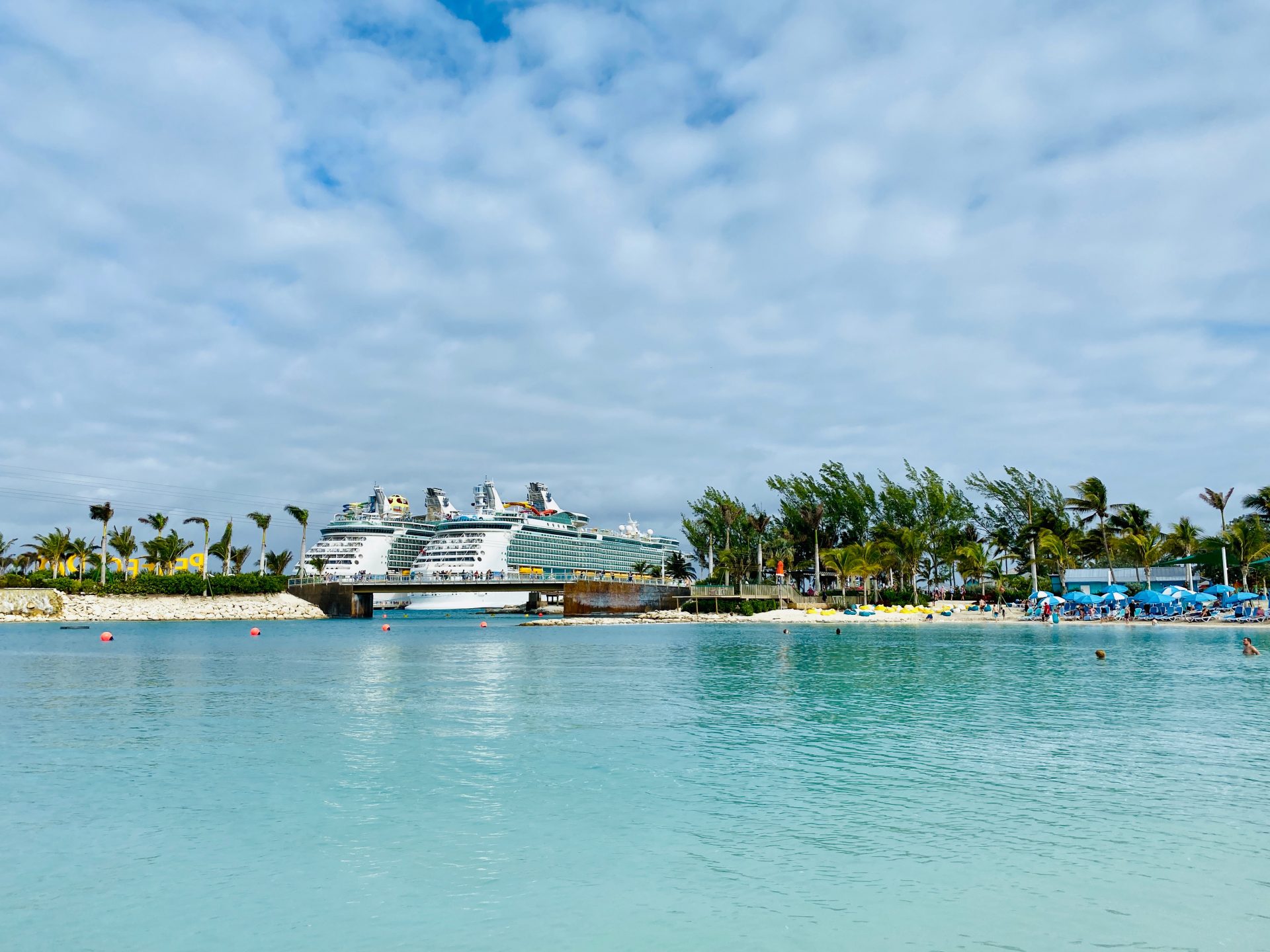 We visited The Bahamas onboard Royal Caribbean’s Navigator of the Seas cruise ship and docked in the capital, Nassau, and on Royal Caribbean’s private island, A Perfect Day at CocoCay.
This is what we did during our two-day visit:

We woke up ridiculously early because we were excited about the thought of the big buffet breakfast that was waiting for us on the cruise. Once we had an overly-full stomach, we decided to start our day in Nassau, the capital of the Bahamas.

We had planned to visit the city centre and then spend the day at Paradise Beach, which is extremely popular and came highly recommended and is located just a 10-minute taxi ride from the cruise terminal and which only costs about $10 each way. Unfortunately, the weather wasn’t great, so this is what we visited in half a day:

As we walked out of the cruise terminal, we came across the famous Straw Market, which is a market full of colourful shops where you can buy souvenirs or braid your hair in the traditional Nassau style.

We only walked 5 minutes to reach the Supreme Court, which was a pink colonial building located in a pretty square with a statue of Queen Victoria.

We were a bit unfortunate because during the months of December and January they celebrate their Carnival, so everything was full of stalls and seating, so we couldn’t really admire the architecture and could hardly take pictures. But without the stalls, it’s a beautiful place because each façade is painted in a very striking colour that gives any passer-by a sensation of joy and happiness.

While in the area, several tour guides approached us to offer guided tours of the city. As the weather was lousy, our plan to spend the day on the beach was falling apart, so we decided that the best thing to do would be to go on a tour and learn little more about the capital.
We were looking at the options and locations each of the guides offered until we finally decided on a tour which cost $25 per person.

The guide who sold us the tour took us to a bus with free wifi where we were left entertained checking our social media while he found more tourists who may be interested in doing the tour.

Once the bus was full, we headed to our first stop, and we stopped in a large square where we visited the Queen’s Staircase.
The staircase was full of tourists taking pictures with locals using the steps to train and exercise “Rocky Balboa mode” (only suitable for the brave, motivated people who have not had a large breakfast on a cruise ship).

The guide told us that the stairs had been carved by slaves and that they were used to escape when the city was under attack.

At the bottom of the stairs, there was a path with plants and tall stone walls on either side. We walked until the end of the walkway and ended up at much more benevolent stairs which took us back to the square where the bus was waiting for us.

In that same square, we found Fort Fincastle, built by Lord Dunmore in 1793 to protect Nassau from the pirates and also the Water Tower, surrounded by souvenir stalls.

In this market, you will have to put your haggling skills to the test, if not, they will ask you for truly abusive prices for any souvenir.
Since we’re terrible hagglers and after a lot back and forth with the seller, we only managed to find a pretty ugly magnet for an expensive $3.50 and as our free time was running out, we decided to buy it on Aliexpress instead.

Afterwards, the bus drove us to the Rum Cake Factory, where we learnt how the typical rum cake is prepared, taste it and buy it.

There were many varieties to choose from and typically, we are not fans of cakes with liquor, but they were delicious and were being sold to tourists left, right and centre.

Our last stop was the Atlantis Paradise Island Resort, a luxurious hotel with a replica in Dubai.

We had 30 minutes to visit the hotel. Walking through it we came across some fountains in the middle of the luxurious and well-maintained corridors, expensive shops, exhibitions… Suddenly, on the left, we saw a glass door that led us to a large artificial pool, where we continued our visit.

It looked incredible, and right next to it, there was a cave with an aquarium inside. We quietly admired all of the colourful fish and walked right through the cave to the end, from where we could see the ocean.

Cave, pool and aquarium in the Atlantis Resort

We went to the beach and took thousands of photos with the white caribbean sand and turquoise waters of the Bahamas.

The heavy rain was getting in our eyes, but that didn’t stop us from posing for our pictures, which made us look like we were having the time of our lives on the beach in the Bahamas.

Nassau beach next to the Atlantis Hotel

To be honest, we made the most of the 30 minutes we had and when 25 of those minutes had already passed, we remembered that we still had a long walk back to the bus, so we started heading back.

Next to the cave, one of the hotel security guards told us that we were in a restricted area since it was for guests only.
We explained that we came from the beach and that no one had told us that it was forbidden. Still, he clarified that the beach was public and that we could be on it, but we could not be on hotel grounds, nor walk through it, and that, if we wanted to leave the hotel, the only way was basically to swim around it.

We imagine that he thought, because of how wet we were, that we had swum to the beach, so when we told him that our tour bus stopped at the hotel entrance and explained how we got there, we saw his eyes almost come out of their sockets.
As he was in shock, we clarified that no hotel staff or security had previously stopped us or told us that it was forbidden and asked that if he could do us a favour and let us through that we would greatly appreciate it. The bus was leaving in 2 minutes, and we didn’t think that we would arrive on time going around the outside of the resort as he kept suggesting.
You could tell he seriously considered all options about what to do with us. After telling us that what we were saying was impossible and that we were probably lying, he finally allowed us to return through the hotel.

At the time, we felt like we were in Ocean’s Eleven, Twelve and Thirteen, all the films harmoniously in one single scene, because without knowing how, we managed to enter restricted areas of one of the most luxurious and expensive hotels in the world. A group of 4 people, wearing flip flops and taking pictures of every feature in the resort!

We ran through the cave, and as we got to the other side, it was throwing it down with rain. The walkway which connected the pool and cave to the hotel was rapidly flooding, and our flip flops were floating as we ran through the puddles. We took off our flip-flops, and with them in our hands, we ran through the same sliding door we exited earlier, and again, there was nothing or no one there to stop us.

At last, we could see the bus in the distance, as we ran barefoot and wet on the fluffy and expensive rugs, we gestured for them not to leave without us.

It started to rain even heavier, and by the time we got to the cruise ship, the streets were already dangerously flooded, so we decided to put our sightseeing day in Nassau to an end and head back to the cruise ship.

Even though we had done something illegal (unknowingly), we were happy to have been able to enjoy the beaches of Nassau, even if it had only been for a few minutes.

Although we enjoy the beach and the sun, our trips are never exclusively focused on spending the day at the beach. Perhaps because we live close to the coast in Spain, the sun and the beach are a part of our day-to-day, so whenever we go on holiday, we always prefer to do activities that we are unable to do at home. Maybe because of this, this activity day was not something we were looking forward to, and because we weren’t expecting it, we ended up having an incredible and relaxing day, which, when it ended, we were left wanting more.

First thing in the morning, it was cloudy, and we were worried that we would have another rainy day like the previous one, but around 11 am, clouds cleared and the sun started to shine brightly. As the temperature was high, we had a perfect day in CocoCay (this is the name of the island, and I was looking forward to using it as part of a sentence).

On the island, we found many incredible beaches where we could sit back and relax. Still, if you are not a beach person, you can spend your day playing beach games and sports, see the island from above on their helium balloon, search for iguanas or go to the pool and swim to the bar to order an incredibly tasty cocktail.
There is guaranteed fun for everyone! For children, it’s a very safe island because it is quite small. Additionally, if you purchase a ticket (about 100€ per person), you will be able to enjoy the water park. This is home to the Caribbean’s largest wave pool and North America’s tallest waterslide, which, just looking at it from the ground will give you a mix of adrenaline and goosebumps!

We spent most of the day relaxing on a sunbed, reading and chatting.

At lunch, we went to a large hut on the beach where they offered a free buffet, just like on the cruise. The food was much lighter than what was usually served onboard but just as delicious, such as sandwiches, fajitas, fries… Exactly what you would eat on a hot day at the beach.
After lunch and hoping to feel more fulfilled, we decided to go for a walk on the beach but soon returned to our hammocks by the pool in the middle of the island.

At the pool, we were surrounded by palm trees, so the wind was a light breeze, and we could enjoy the sun, but next to the ocean, the wind was quite strong, and it wouldn’t have allowed us to take the long nap we took by the pool.

We took loads of pictures of this incredible island and in the end, against all the odds, we enjoyed a relaxing day in the sun to the fullest. For the first time, we understood those who dedicate their whole holidays to doing the same. 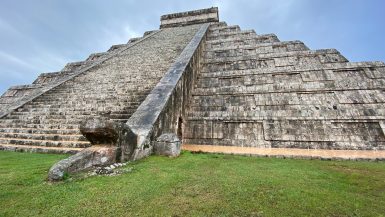 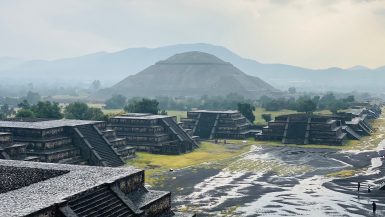 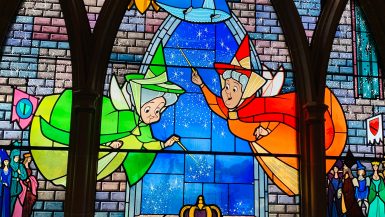 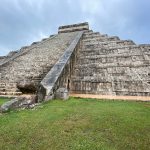 3 Days in idyllic Cancun
5 months ago 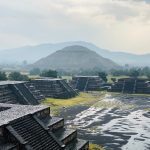 3 days in the heart of Mexico
5 months ago 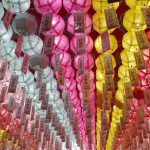 Jeju Island – A day in paradise
5 months ago